In my last blog, I had discussed the various causes of hypertension. Today we learn how to measure Blood Pressure[B.P.]. using the different types of BP measuring instruments.

Types of BP apparatuses in use-

There are 4 varieties available in the market, namely-

Nowadays you can purchase them online also.

The first one [Fig.1] is the Mercury sphygmomanometer which is the gold standard of B.P.measurement and a widely used one by doctors all over the world.

The second one [Fig.2] is the called Aneroid barometer and is a good portable one. The third one [Fig.3] is an electronic one-Digital BP apparatus– which needs to be calibrated and is also highly accurate and used mostly as a home measurement unit. The fourth one [Fig.4] is the Wrist B.P. measuring unit which is mostly used in obese people.

On purchasing one of the BP apparatuses, you have to attach the cuff of the instrument to your upper arm and inflate it either manually[in case of Mercury sphygmomanometer or Aneroid BP apparatus] or by pressing the start button on a digital/wrist instrument, as shown in Fig.2, then release the air.

Similarly, in the case of a digital BP apparatus, you do not need a stethoscope to hear the sounds. Simply press the start button after connecting the cuff to the arm and instrument as in Fig.3 and the instrument will record the BP and your pulse rate also and report it after the cuff deflates fully. 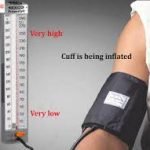 To get one of these instruments, just click here

In hypertension, the most important part is its measurement. As shown in the picture above, you have to

Why does BP rise in Hypertension?

Both the Systolic and Diastolic pressures rise due to-

Here is one good article that you should read to know how to measure BP correctly- Click Here. You can also read this infographic article to know more about blood pressure management- Link

In my next article, we learn how to prevent and treat hypertension.